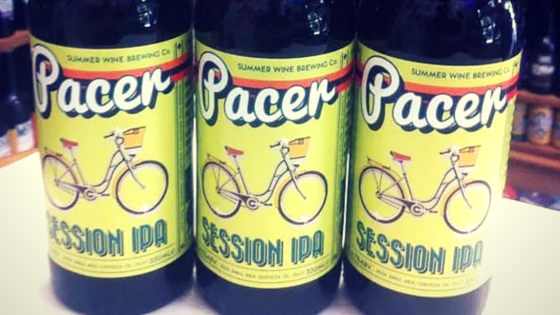 Sometimes, less is more. This is especially true with beer. Big brews with burly ABVs often don’t lend themselves particularly well to beach days or all-nighters around a campfire, where the “just one more” mentality tends to reign supreme.

Enter the “session” IPA, a beer style that has come very much into fashion over the past few years, and it’s easy to appreciate why: all of the vibrant personality and hoppy goodness of their big brothers, and yet manage to be every bit as smashable as the mass-brewed swill. These flavorful lil’ guys tend to appear en masse as the summer months approach, meaning their heyday is upon us! It’s difficult to find a craft brewer that doesn’t offer at least one more casual beer for the season, meaning that summertime is the perfect time to down an entire six pack without risk of (too) much judgment.

One such offering comes from Summer Wine, a relatively new (they went commercial in 2008) brewery from Yorkshire. Focusing on beers that are “unapologetically flavour forward in nature,” Summer Wine seeks to challenge the beer status quo that seems to rule the area; the Yorkshire beer scene has become, in their opinion, dormant and unsurprising. Instead of sticking strictly to this sleepy way of life, Summer Wine is determined to “tear up the rule book and…[redefine] how Yorkshire beer is perceived.” Already growing at an impressive rate, the brewery promises that they’ve only just begun, and are bent on offering a pantheon of surprising beers in short order.

And it would seem like their Session IPA – the aptly named Pacer – is just one offering that helps them achieve that goal. Cultures truly collide in this amicable brew, with a British malt backbone and a hop and yeast profile straight out of the United State’s West Coast. Pouring a golden-amber with a fluffy white head, Pacer emits a citrusy, summer-like aroma that begs to be taken alongside your outdoor adventures. A definitive hop kick of a beer that finishes with a nice bitterness, Pacer’s light body confirms its casual nature and crisp, quenching qualities. Summer Wine hopes this will be your “go-to” beer, a beer that goes modest on the alcohol content (a mere 4.1%) but pulls no punches in the flavor department – “a strength that’s geared for maximum enjoyment.”

The label advises to enjoy this ale out of a tulip glass, but go ahead and chug straight from the bottle on your next beach day, or if you bring it along on a hike. Summer Wine won’t mind.