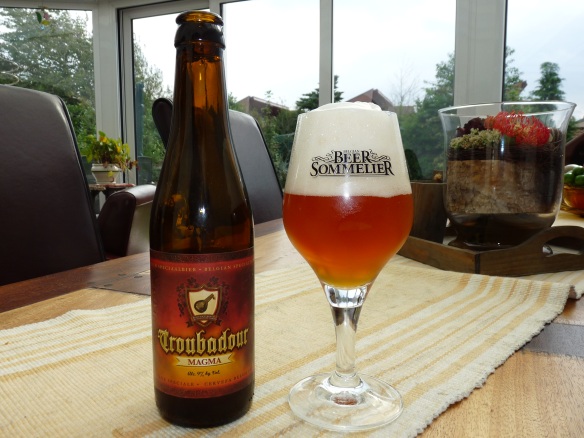 Few beer varieties bridge the flavors and profiles of different regional beer stylings quite like a Belgian IPA. This little hybrid oddball is the best of both worlds, as though an IPA and a Beglian trippel had little beer babies. And it’s an adorable little bugger.

Between the formidable floral and bitter wallop of the hop profile to the fruity, caramelly charisma of the Belgian yeast, this identity crisis of a beer is certainly a clash of cultures. Of course, which culture it’s clashing with largely depends on its hop character, but that adds to the fun and makes this style one of the most versatile out there. Do we have the earthy, herby profile of European hops? Or the floral, resiny impact of their American brothers?

In the case of the Troubador Magma, it’s most certainly the latter, but we’ll get back to that in a moment. Let’s talk about where Magma comes from – an impressive little band of 4 brewers that calls themselves, fittingly enough, The Musketeers.

Located in Ursel, Belgium and debuting in 2000, The Musketeer Brewing is the brainchild of 4 brewing engineers (brewgineer?) – recent graduates an acclaimed brewing program in Flanders. Graduating from unreliable batches of wonky experiments to refined and gorgeous offerings in a blazingly short period of time, the combined efforts of these 4 gentlemen came to represent some of the best beers offered by modern Belgium. Their goal, they claim, is to “extend the rich brewing traditions of Belgium not only to the citizens of Belgium, but to the rest of the world as well.”

Their Troubadour – not actually the name of the brewery, but rather the name of a beer lineup – offerings span a variety of beloved Belgian styles. The name itself harks back to medieval era men who would wander from city from city to city spreading joy through music and poetry. Their beers do largely the same thing, albeit with a higher alcohol content.

Troubador Magma is, as mentioned, certainly on the American side of things when it comes to its hop game. A huge burst of citrus opens the front end, but it’s tethered back to Earth with the decadent sweetness and fruitiness of its Belgian malt and yeast foundation. Its fiery color (with bubbly white head) matches the ember of alcohol heat, but the whole package remains deceptively drinkable.