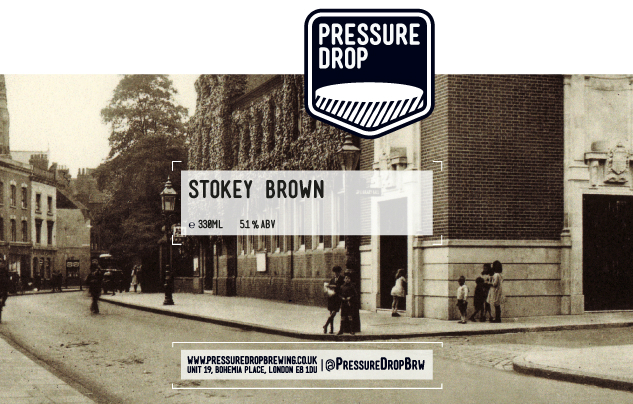 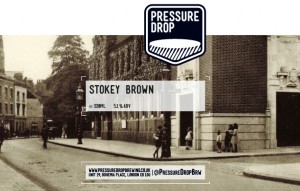 A delightful toffee and nut evoking brown ale that is a shining reminder that brown ales can be absolutely delicious when brewed with care and passion.

– Southern English Brown Ale: “A luscious, malt-oriented brown ale, with a caramel, dark fruit complexity of malt flavor. May seem somewhat like a smaller version of a sweet stout or a sweet version of a dark mild.” ABV. (alchohol by volume) typically 2.8 – 4.1%

Pressure Drop Stokey Brown can be best described as an American style Brown Ale. It’s higher ABV. and it’s piney aroma and bitter hoppy bite definitely positions it comfortably alongside the best of the style being brewed in the U.S. today.

Hackney based Pressure Drop have modelled many of their core and one-off beers on American style craft beers. It’s a modern approach that is driving much of the craft beer movement in the U.K. From their outstanding pale ales and IPAs to Stokey Brown and Wu Gang Chops The Tree – their unique take on a German Hefeweizen, Pressure Drop have rapidly become one of the most respected and in-demand of London’s many new upstart craft breweries. We’re certainly massive fans at The Beer Vault.

One of the reasons to champion modern brown ales like Stokey (that name by the way comes from the fact that the beer was first brewed when Pressure Drop was still pilot brewing in Stoke Newington), is because they represent a unique family of once noble and proud beer styles, one that had drastically fallen out of favour in the U.K. Much of that lack of interest could well be leveled at the fact that Newcastle Brown Ale had become a stale and decidedly unfashionable brand in Britain. Thankfully, more British craft breweries are now tackling the style with fresh eyes and producing beers that are complex, loaded with character and brewed with unique and expressive hops. So why not raise your Stokey Brown filled glass and cheers the slow but assured resurgence of the brown ale in its homeland.